An algorithm has been developed to retrieve surface Soil Moisture (SM) from multi-temporal satellite (SAR) data. The algorithm is tested in a semi-arid tropical region in South India using 30 satellite images of RADARSAT-2, SMOS L2 SM products, and 1262 SM field measurements in 50 plots spanning over 4 years. The validation with the field data showed the ability of the developed algorithm to retrieve SM with RMSE ranging from 0.02 to 0.06 m3/m3 for the majority of plots. Comparison with the SMOS SM showed a good temporal behaviour with RMSE of approximately 0.05 m3/m3 and a correlation coefficient of approximately 0.9. The developed model is compared and found to be better than the change detection and delta index model. The approach does not require calibration of any parameter to obtain relative SM and hence can easily be extended to any region having time series of SAR data available.

The developed model holds the potential to be applied over India SAR satellite (RISAT) data and estimate soil moisture over larger area with a higher spatial (lesser than 100 m) resolution.

Details of the algorithm along with the validation can be found in published article. 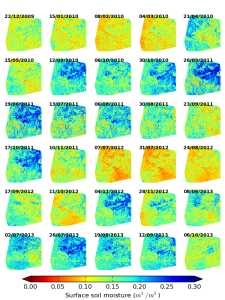